What a great name for a panel. Hats off to the copywriter who thought of this. It’s actually a very apt title for this panel too as it features four writers who dig and bury bodies all over Scotland for a living. What a day job!

There’s some grisly spots all over Scotland – cities with chilling corners and rural areas with more rot than is reasonable. To see Scotland through the eyes of four crime writers is to peer into its criminal soul and scream….

Edinburgh, a capital city with history and heritage right? Yes, but when Gillian Galbraith gets to show you around, the city takes on a much darker tone. Dare to go down to the Troubled Water’s edge and look out at the Forth Bridge and Gillian will whisper the grim secrets this part of the water is hiding in her 6th novel.

A city tour into the heart of Edinburgh itself with Gillian is no more tourist friendly. She’ll drive you through down the Royal Mile and across the bridges but the minute you go down The Road to Hell to the underbelly of the city – Leith Docks, well, you’re in Gillian’s deadly grasp.

“Leith’s glory days were long since over. A few of its street names, Baltic Street and Madeira Place, hinted at its romantic past as a maritime port”.

Pumped full of culture and a seafaring past, read this novel here and breathe in the salt air and the taste of danger on your crime reading lips.

Douglas Skelton sticks the heid in for Glasgow (on Booktrail)

It’s a Blood City he’ll tell you, the title of his first Davie McCall novel. He’s also written a number of non fiction titles of real life crime such as Glasgow’s Black Heart: A city’s life of crime, which show you the deepest and darkest recesses of the city in real life. With this and his fictional tour of Glasgow, Skelton’s tour is hardcore. Apt that his name sounds like a certain fairground ride as his novels are thrilling rides of downward spirals and deadly descents.

And at the bottom of society? The shadowy gangster underbelly of the city – from the gang warfare now currently taking place around Glasgow Green and the streets such as Duke Street which, when full of people is likened to “a slaughter house”.

In Glasgow’s Black Heart you’ll discover the real history behind the city’s Tolbooth area and the gruesome goings on on Glasgow Green.

True stranger than fiction or vice versa? That’s a story in itself.

After two grisly cities, you’ve be forgiven that a literary journey to a more quieter and small city such as Dundee might in order. Well, best not go to Dundee with Russel then as his A J McNee novels about a former detective who’s now a Private investigator reveal a deadly dark Dundee.

Scotland is grave indeed when it comes to Dundee – Mothers of the Disappeared reveals a serial killer targeting young boys, and you get a gruesome glimpse of the criminal underbelly as you did with Douglas with McNee trying to befriend ageing gangster David Burns.

“Dundee displayed its culture and shining future, its achievement and its potential. I had to wonder: Which was the real city? Was it possible for both to exist side by side?”

Douglas’s Dundee is a city to explore for yourself.

Getting gallus about Galloway with Catriona McPherson (on Booktrail)

Catriona McPherson is a patient lady – she wants to get gallus about Galloway. Dumfries and Galloway is her criminal past. She sets her novels in and around the cities and towns there. The setting is more rural and countryside based – the village of Portpatrick comes under the spotlight in Dandy Gilver and a Bothersome Number of Corpses but there’s even the more spiritual bodies if you go to Moffat and see the Haunted Ram which appears in Dandy Gilver and a Deadly Measure of Brimstone.

There are real buildings and real tales of folklore merged into her crime stories so chances are fact and fiction will really give you a taste of what Galloway has to offer.

Scotland The Grave is a map of victims, crime scenes and bloody secrets. But X marks the fictional spot of some criminally good writers who show you into the shadows…

Meet these authors and see their crime scenes at the Scotland the Grave panel at Bloody Scotland. But watch your step, or you could end up in a grave situation of your own.

Get your tickets to Scotland the Grave: September 10th, 12:15pm

This is the third post of the Booktrail blog takeover for a series of posts exploring where setting shapes a number of novels from authors attending Bloody Scotland this year.

In our series of ‘5’ themed blogs celebrating Bloody Scotland’s fifth year, Russel D McLean reveals his top 5 pulp novelists that you probably haven’t read but should.

Appearing at number 5 because chances are you’ll know his name, and you might even have read his classic, Psycho (far darker than the movie) – and until recently that was all I knew, too. But a 2008 re-release by Hard Case Crime of two of his novels back to back (Shooting Star and Spider Web) showed that Bloch was a master of the pulp novel, with a mean line in prose and an eye for the seedier side of life.

Even if you don’t know Tidyman, you’ll know his most famous creation, the black private dick, who was a sex machine to all the chicks: John Shaft. As well as writing the screen adaptation of Shaft and its first sequel, Shaft’s Big Score, Tidyman also wrote the script for The French Connection, and one of Chuck Norris’s earliest films, A Force of One. He only wrote seven novels, but when one of them’s Shaft, you have to tip your pulp hat to the man.

A prolific British pulp novelist, screenwriter, playwright (and quite possibly insomniac), Trevor wrote under several pseudonyms, including Simon Rattray, Caesar Smith and Lesley Smith, but was best known for his spy thrillers written under the name Adam Hall. I’ve only read one of Trevor’s books so far – The Runaway Man (1958) – which, as the back cover promised, had a “strange end” in which the protagonist lies “prone and chilled on the rotting hulk of a barge”, and I’m definitely on the lookout for more!

Branded Woman by Wade Miller (1952) has one of my favourite femme fatales in the enticing smuggler Cat Morgan, seeking revenge on the man who branded her. Miller is the pen name for Robert Wade and Bill Miller, who wrote a number of novels together, including Badge of Evil, which eventually became better known in movie form as Touch of Evil (1956).

Prather was the author who started me collecting pulp novels many years ago, when I first stumbled across the beautiful Gold Medal edition of Always Leave ‘Em Dying. “Gals, guns, guys go round and around as SHELL SCOTT spins the wheel!” yelled the strapline, and right there I was hooked. Although Prather did some brilliant standalone novels (1952’s The Peddler comes to mind), it was Shell Scott with his white-blonde hair, steely gaze and snappy one liners who really captured the reader’s imaginations.

Russel D McLean will be appearing at Bloody Scotland this year in Scotland the Grave on Saturday 10th September at 12:15pm.

And When I Die is out on Kindle now and in paperback on September 8th.

The Booktrail takes over the Bloody Scotland blog for a series of posts exploring where setting shapes a number of novels from authors attending Bloody Scotland this year.

Bloody Scotland is one of the crime writing, literary festivals of the year and this year, more than ever, The Booktrail is investigating some of the best crime fiction celebrated at the three day event.

The Booktrail is all about books set in various cities and countries across the world but there’s nothing like some gritty crime fiction set in Scotland. For every book on the site, there’s a travel guide and map so you see the country through the eyes of the author as well as their characters. It’s a Bloody (Scotland) good way to travel! (Visit Scotland via fiction: http://www.thebooktrail.com/book-trails/?pg=1&location=Scotland) 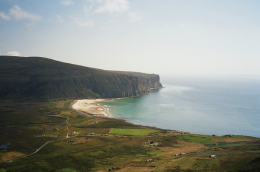 This year, we’re collaborating with Bloody Scotland and I will be reporting on events, Scottish fiction and the wealth of crime fiction that’s on display up in Stirling. I even got to sit on the rather nice and cosy Judges Sofa as the crime book of the year, now the McIlvanney Prize longlist was drawn up. The winner will be announced on 9th September. Hush, but my favourite is on there so fingers and tartan covered trouser legs will be crossed. Sworn to secrecy about who I voted for though!

Tartan Noir: Crime fiction set here even has its own name – Tartan Noir. It’s a stamp, an identity for the type of crime writing that uses the rough and rugged Scottish landscape as a character in itself.

To use a Craig Robertson turn of phrase, there is a lot that is ‘Gallus’ about this Tartan Land. I have found more out about Scotland via fiction than anything else, despite having holidayed from John O’Groats via the Scottish islands and down to the Scottish borders over the years. And I’ve grown to love my adopted country even more because of it.

From Aberdeen to Edinburgh: No need to visit the Tourist Centre if it’s the literary Scotland you want to see. Aberdeen is known as the Granite City, famous for its stone as well as its oil, but just wait until Stuart McBride shows you the sights and crime underbelly of the docks! 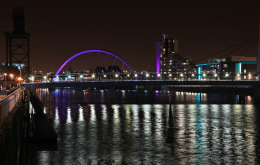 If it’s Glasgow you fancy visiting, then I can assure you that if you allow Douglas Skelton to guide you around, there’s a experience you’ll never forget. He writes of the Glasgow underbelly where gangsters and gritty Scottish banter will not only show you the city but introduce you to the ahem ‘unique’ Scottish vernacular.

From the modern day, Scotland has always had that allure of times gone by and its supernatural, folklore element. Of course this has been incorporated into its crime fiction in more ways than one. Edinburgh’s ghostly gothic tones are as much a character in James Oswald and Oscar de Muriel novels than anywhere else. And just wait until you head up to Orkney. There’s something endlessly ethereal about these islands and this more than comes across via fiction set there.

Oh, but let’s not forget deadly Dundee under the hand of Russel D McLean or the often theatrical Galloway of Catriona McPherson. Scotland is such a diverse country, small but perfectly formed and some of the most stunning landscape in the world. And the home to some of the most memorable characters in crime fiction.

I’ll be writing about these and more in future posts. How writers showcase their part of Scotland on the map and how Scottish greats have come to the fore with their writing no matter where they write about – Val McDermid has even invented her own city of Bradfield in England. The Scottish/English divide no more.

But let’s not forget the lovely Stirling itself – home to the very festival of crime writing greatness. A city where for three days, the finest of the fine will be gathering to talk crime, murder and more. Scotland has never looked so bloody.