Some early morning evil never goes amiss, and what better way to start the day than with Denise Mina and Peter James comparing evil with Alan Riach and each other?

After brief introductions from Alan on who they are (and who needs that?), they both read from their books. Peter said he’s famous for short chapters, so would read chapter one from his new book, which took all of ten seconds. On that basis Denise allowed him another 19 chapters. 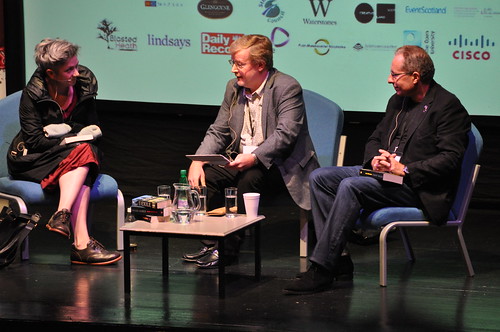 They discussed where they draw the line, because everyone is different, and also investigated what counts as rape. The law says one thing, but morally you might not agree.

Peter has experience of Broadmoor, but only as a visitor, and on inspection it seems as if certain tabloids might actually count as more evil than the worst psychopaths. Evil is an unwillingness to understand.

Asked whether it’s important for good to conquer evil, it appears this is not always necessary, and many readers prefer realism to happiness. Sock puppets turned up once more, and we found out that authors write their own blurbs, telling the world how excellent they are, much in same vein as the infamous puppets.

Not knowing how a book will end is something Denise experiences every time. Peter knows where he’s going to end up, but also knows he will change his mind.