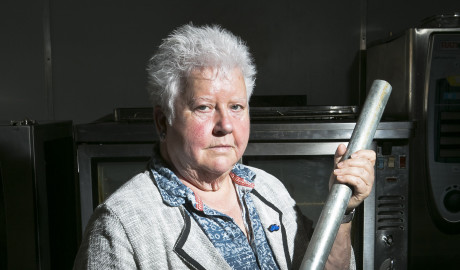 Because it’s Bloody Scotland’s fifth year we asked McIlvanney Prize 2016 longlister Val McDermid to reveal the top 5 songs that accompany her while she writes her books.

Moody and dark, with a great guitar break from Mark Knopfler. I used to listen to this a lot when I was writing the Kate Brannigan private eye novels.

I often listen to Sigur Ros when I’m writing. Because their lyrics aren’t in English, they don’t distract me and I love the way they blend the ethereal vocal with the very strong musical lines.

I love Wim Mertens music. I find it good for concentration and also quite uplifting, which is always a good antidote to some of the dark places the work takes me. And his voice is quite extraordinary, which is also a good way to get into heads that are far from ordinary.

There comes a point close to the end of a book where I need a kick of energy to drive me forward and this is a track that does precisely that. It’s a great surge of sound that impels me into action, profoundly serious and quite terrifying too.

Lily, Rosemary and the Jack of Hearts – Bob Dylan

This is one of those great story songs. It bounces along with an energy and brio that belies the darkness of the tale it tells. It’s always good to be reminded of how to write tantalising mystery into a narrative. And it has one of my all-time favourite lines — ‘The only person on the scene missing was the Jack of Hearts.’

Splinter the Silence by Val McDermid is published by Sphere, £7.99.