Drop the incomprehensible jokes, and the cultural references that you don’t know what they mean, and a translation is still a translation and can win awards. That’s what Val McDermid found with her French translator, and it’s a fair bet that’s not a one-off. 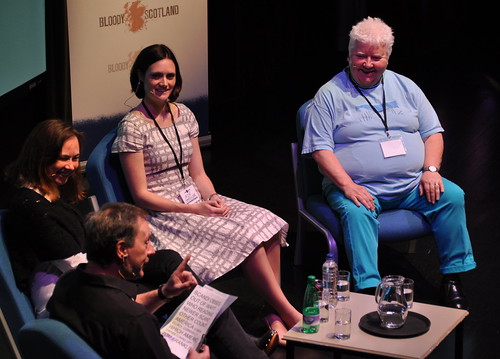 Translations were just one thing up for discussion when Barry Forshaw talked to Val and to Yrsa Sigurðardóttir and editor Jade Chandler first thing on Sunday morning. During the warm-up beforehand they mentioned kippers for breakfast and missing the Archers, but for the real event it was almost all Nordic crime, with Barry showing off his long-rehearsed pronunciation of those impossible names. He did well with Yrsa, but still got her to say Sigurðardóttir so we could all tell that he still has some way to go. 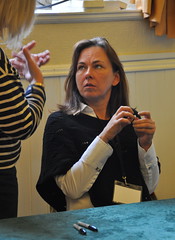 Scotland has a communality with the Nordic countries, sharing similar values. That’s why the two areas feel they belong together.

All participants in The Next Big Thing were of the opinion that one reason Nordic crime has done so well is that so far we’ve only had the cream of the crop. Now there is a trickle of more mediocre crime novels coming through, proving that just as with some US novels, not everything travels successfully.

The UK has become more European, and the US feels much more foreign than we expect it to be. Val gets mobbed in Germany, but there isn’t much German crime coming here. The general piece of advice they have for publishers looking to translate foreign crime novels is to begin with an author’s first, and not start mid-series as has been known to happen. 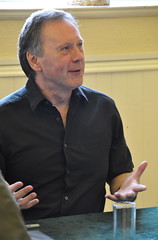 Barry kept promising to tell us who he thinks will be the next big thing, and I don’t know if it’s a pronunciation issue, but it sounded like it’s Higashoo. Which is nice, if somewhat incomprehensible. But that’s coming from the man who discovered Bloody Stirling only this weekend…

It’s tricky, this book stuff. Maybe the next big thing will be the Manx Murder. Channel Isles Crime. Or simply something set on one of the many  Scottish islands that seem so little known.