What’s in a logo?

Like our logo? It was designed by students from Forth Valley College.

The students worked to a commercial brief as part of their coursework, invited by us to come up with some ideas for the website, brand awareness and social networking. Just a few weeks later, they made a highly professional presentation to a Bloody Scotland delegation, including crime writers Gordon Brown and Craig Robertson and leading literary agent, Jenny Brown.

They all came up with potential logos for the festival, and one of those – a gory map of Scotland, complete with blood droplets for islands, dreamt up by Louise Macqueen from Sauchie and Stephen Henderson from Tullibody – was an immediate winner.

The prototype logo designed by Louise Macqueen and Stephen Henderson

We knew immediately that this was the logo for Bloody Scotland. Distinctive and unique like the name of the festival itself, it complimented it perfectly.

It rocks! The students have made the entire country run red with crime fiction!

Student Stephen explained that his “bloody good idea” almost came about by accident.

I had some vectors of blood splats that I used as the initial idea. When I saw the first draft, I realised right away that one of the splats looked like the outline of Scotland. That was when I had my brainwave and we set to work. I’m really happy that this is the ‘legacy’ of my work on the project. In years to come I can say “I made that, that was me!”

Class tutor Avril Smillie said that the students had thoroughly enjoyed working on the project.

We try to give them as many live projects as possible so that they can see the demands of working for real clients. It really brings their creativity to the fore. This group always rise to the challenge and were buzzing with ideas from the start.

All we had to do was take the concept and work it up into a professional logo.Our thanks to all at Forth Valley College! 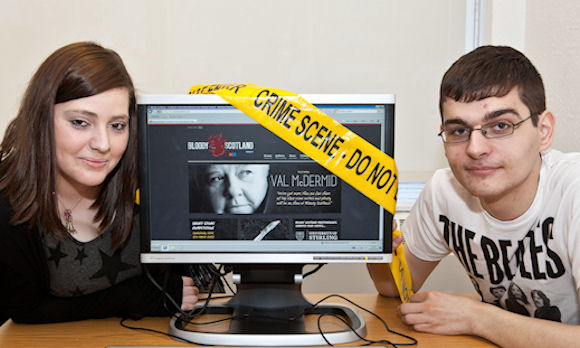