Picture Her Dead by Lin Anderson

Continuing a terrific season for new books by Bloody Scotland authors, co-founder Lin Anderson will be launching Picture Her Dead, the eight title in her Rhona MacLeod series, at Blackwell’s in Edinburgh on the 20th.

As a treat, you can also see a live demo of Return to Scene forensic technology!

When art student Jude Evans disappears on a photographic visit to a derelict Glasgow cinema, her friend Liam he enlists the help of his birth mother, forensic scientist Dr Rhona MacLeod, in his search for Jude.

Visiting other derelict cinemas on her list, they find clues to her disappearance and to the horrifying secret she may have discovered behind those walls.

You can also catch Lin at Peek Cinema in Edinburgh on June 21st, where she’ll be addressing the theme of landscape in crime fiction and drawing comparisons and contrasts between Scottish and Scandinavian traditions. All that plus a discussion of the relationship between noir film and literature. 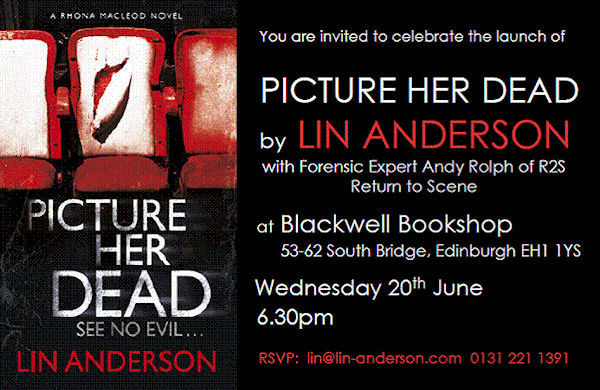