In the beginning was Laidlaw …

Len Wanner’s introduction to the man himself was fulsome and considered. Comments such as … created an archetype with an all access pass … seen as the source for tartan noir …the genre debt to him is remarkable. 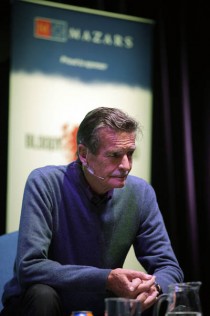 When Len paused for a response, Willie joked he should now leave, that anything else would be an anti-climax.

Len’s first question, almost inevitably – because it’s what I wanted to know, was why did he turn to crime?

After writing his critically acclaimed novel, Docherty, Willie felt what he described as contemporary starvation. He want to connect with his peers and on further deliberation he said he heard a voice. This voice in his head was abrasive … it was clearly Scottish and he deliberately made him a policeman because he wanted him to deal with the bad stuff in society.

He went on to say that he was more than pleasantly surprised with the impact.

He argued that he shouldn’t take sole credit for beginning a genre. What he experienced was a hunger for contemporary life and Laidlaw gave him a vehicle for re-connecting. He loved Glasgow and he wanted to write without restriction, to bring his writing into the then present.

The book was of course a huge success and his agent counselled him saying that that if he wrote one of these each year he would soon become a millionaire. Of course, he didn’t and one sensed that any regret that flavoured the words was simply playing to the gallery.

The previous night, Ian Rankin cited McIlvanney as one of his early influences a comment that humbled and delighted him. He said, “Crime writers are a generous species, at other more literary  gatherings, he joked, you can often see the glint of knives in the shadows.”

He went on to say that as he explored Laidlaw on the page the character fascinated him. He is of course from Kilmarnock, but a convert to Glasgow and a big part of the element of the Laidlaw books for him is it allows him to demonstrate his respect for Glasgow, you don’t pay homage to the city, he said, you meet it on equal terms.

Len asked if his achievement was equal to his ambition.

After a pause, Willie answered by saying that he wanted to write a genealogy of the Scottish working class. He decided early on in life that he wanted to write about ordinary people. He came from a talkative family, he lived in what he described as a “verbal house” and he savoured the stories he heard from everyone around him. He was tired of literature that talked about the ruling classes and he wanted to commemorate the ordinary citizen. For him there is a serious historical tradition in the working class that deserves enormous respect and with his work he wanted to celebrate where he came from.

Someone asked – it may have been Len – what do you think is the artists role? His answer was that this comes down to the choice of the artist. In his view politics have always mattered, in his view the world has become a monopoly board for the world of finance – capital rules the world and governments are secondary and he wants to understand that.

A question from the floor – what advice would you give to students?

He answered, “Write about what you love – to thine oneself be true, as the quote says. Try to sustain the energy of your commitment.” He went on to say that publication should not be viewed as the be all and end all. “It’s perfectly valid to write and clarify your own thoughts and feelings, even if you don’t achieve publication. You can understand yourself, your own nature and impulses. Do it for yourself … and if publication happens good on you.”

The last question was from Len and he asked was there going to be another Laidlaw?

Willie told us that Canongate are going to re-publish his Laidlaw books and since this has been agreed he feels like a born again writer. Laidlaw has been spinning around his head again and he thinks he would like to write another one.

Sponsored by The Glencairn Glass We are delighted to announce the winners for the McIlvanney Prize 2022 and the Bloody Scotland Debut Prize! The finalists for both prizes led a torchlit…