One of the questions I get asked all the time is, “Is it difficult to write American thrillers when you 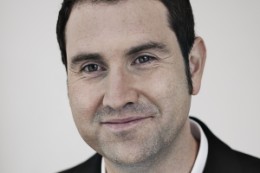 live in the UK?” Just to be awkward, my answer tends to be yes and no.

Yes, it can be a challenge, because it inevitably involves a little more research to write about another country than about your immediate surroundings. But also no, because all fiction involves creating the writer’s own world, where you make the rules, put words in the mouths of the characters and choose the settings. We’re making all this stuff up anyway, so why does it matter where it’s set?

To me, there are three things that really matter in a story: people, situations, and what-ifs.

There aren’t a whole lot of similarities between Glasgow, Scotland and Los Angeles, California. Obviously the climates are freakishly similar and both cities are filled with astoundingly beautiful people – aside from that, not much. But one thing the two metropolises do have in common is geographic. They’re both built in a depression: Glasgow fills the Clyde Valley, LA sprawls across the Los Angeles Basin. It means you can escape the urban sprawl for a while and look down on it to get some perspective. A useful thing to be able to do in both cities.

Where I live, you can get into the car and be above the city in minutes, on the quiet country roads in the elevated green belt south of the city. I’ve always loved that view. You can look down on the buildings and the streetlights and the million unique stories and have a contemplative Harry Bosch moment.

One spring night a couple of years ago, I was driving on one of those roads. I wasn’t having a deep Harry Bosch moment, I was having a returning-from-Sainsbury’s moment. About halfway home, I crested a hill and saw the city spread out before me. And this time, I saw something else.

A car, stopped by the side of the road. As I got closer I realised the car had broken down. Almost simultaneously, I saw another vehicle parked just around the corner. In my headlights I saw a woman watching, arms clutched around herself for warmth as a man crouched down by the front tyre, in the process of changing a flat.

I was glad somebody had already stopped for the stranded driver: a Good Samaritan. It would be no fun to be stuck out here waiting for the AA.

I passed by them and continued on my way, but I’d already started to think. I thought about what a strange, in-between place it was: dark, lonely and isolated, but in view of a city and suburbs home to more than a million people. I thought about how quickly it can get lonely when you leave the city. I thought about how lucky it was that somebody had been passing the stranded driver and been willing to help. And then I wondered what would have happened if the Good Samaritan wasn’t so good.

All of a sudden, I had an idea for a book, and I knew it would work in Los Angeles as well as it would work on a back road south of Glasgow.

Because when you get down to it, what country a thriller is set in isn’t the important thing. What’s important is people, situations, what-ifs. Like you, stranded on a dark, lonely road, forced to accept help from the first stranger who stops.

What if he’s a bad Samaritan?

The Samaritan is out on July 16th from Orion.

The official launch is at Waterstones Argyle Street at 7pm on Wednesday 15th July – register for free tickets here: https://www.eventbrite.co.uk/e/the-samaritan-by-mason-cross-official-book-launch-tickets-17042509605?ref=ecount

Mason is appearing at Bloody Scotland on Sunday 13th September at the following event: