For the last few years Bloody Scotland has been forging a relationship with a noir festival, Xabia Negra, in the town of Javea on Spain’s Costa Blanca. With the support of the local town council we have had authors such as Graeme Macrae Burnet, Abir Mukherjee, Craig Robertson, Lin Anderson and Alexandra Sokoloff appear at the festival. This year, due to local elections, the council decided to rest the festival but, keen to keep the link with Bloody Scotland, invited the Four Blokes (Douglas Skelton, Mark Leggatt, Neil Broadfoot and myself) to put on a one-off event.

And so the Four Blokes booked their flights, purchased their Euros and packed the sun cream for a trip to Spain.

Unfortunately, due a domestic emergency, Neil had to withdraw at the last minute. So the Four Blokes became the Tres Amigos.

The three of us departed the shores of the UK at an hour only fit for farmers and those that forgot to go home the night before. We departed on the 31st of January, Brexit Day. We did have a minor worry that we may not be allowed back in. But that had nothing to do with Brexit and isn’t something that need bother anyone reading this. It was also transfer deadline day for the football. Mark spent the day waiting on the call from Manchester United to fill the striker’s position – he’s still waiting. 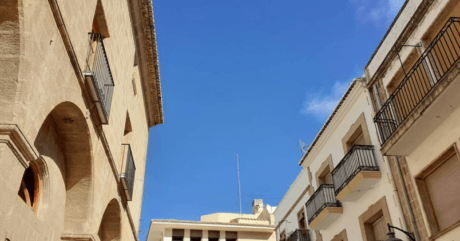 Javea’s old town – this is what blue sky looks like for the sun-starved of the UK.

Our first task was to visit a bar, well what else? But, being good boys, we stuck to a rigid diet of Café con Leche. 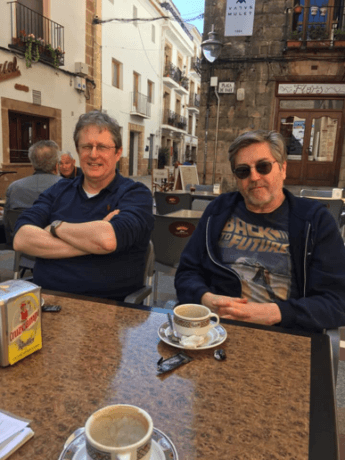 Mark and Douglas – with Douglas winning on the cool-look stakes.

Post the coffee I had arranged to meet the Javea council’s representative, Pepa Roig, to visit the venue and make the necessary arrangements for the event. The venue turned out to be fantastic. Owned by the church our room sat in a renovated 18th century building. 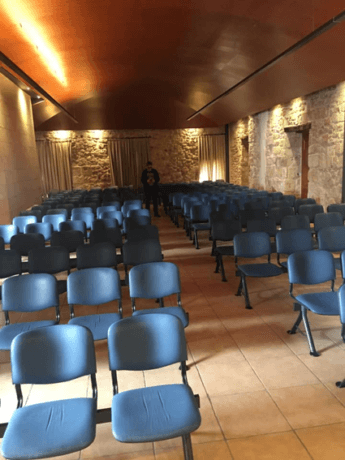 The venue and the calm before the storm.

After scouting the venue –  and given it was a Friday night –  and given we were in Spain – and given the bars were open we decided to sample the local nightlife in Javea. A quiet night was had, well as quiet as you can expect from three ageing rock stars on the eve of a gig – in other words we went wild(ish) – threw caution to the wind and almost stayed out ‘till midnight. 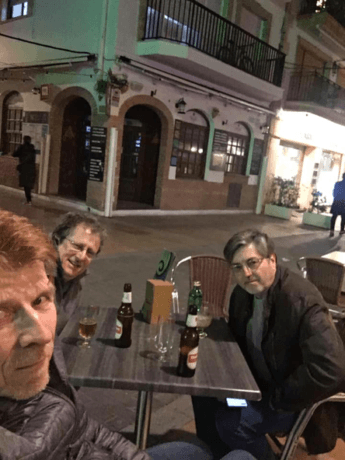 Somewhere, in the less salubrious part of town, three men sort out the world’s problems.

We awoke to a sun-drenched day of waving palm trees, balmy breezes, lapping waves and the plaintive cries of frigate birds whirling in the cloud peppered sky. (Dear cliché monster than you for the last sentence.)

Actually, it rained. Admittedly for all of ten minutes and in such a manner that it would be embarrassed to call itself rain back in the West of Scotland.

We’d all arranged to meet up at lunch time for a bite to eat and a quick chat about the gig. Not for a rehearsal; there’s no way to rehearse Four Blokes – it’s a straight fly by the seat of your pants exercise every time. However, we felt we needed to ring a few changes and the plan for the evening was to mix things up a bit by taking a leaf out of the improv comedy circuit. The first half of the gig would be the usual mix of one author writing while the others answered the audience’s questions. In this way we construct a crime story live but, and this is the large, elephant sized but, we decided to allow the audience to throw a few curveballs our way in the second half. We planned to ask them to draw from the Tea Cosy of Inspiration (which is fair enough as it where we draw our inspiration from) – but in this case an audience member would draw out a ‘Make it Awkward for Us’ slip and challenge whoever was writing next to add in a sentence of their choice – or write the next section in a particular style – or introduce a new character and so on (see below). Later in this blog I’ll let you know if this addition was a resounding success or a spectacular own goal.

The ‘Make it Awkward for Us’ Sheet.

Once the new format was agreed we retired to the balcony, stricken with the effort of talking to each other. 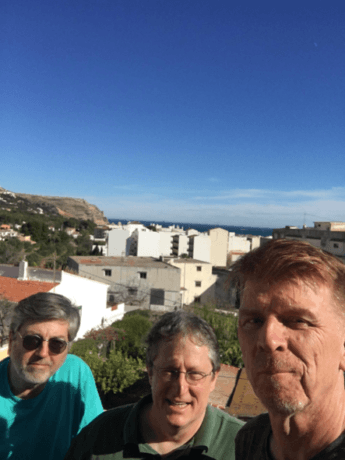 And so to the gig itself. We had arranged to do a sound check at five o’clock (sound checking – that is so rock’n’roll). But if there is one thing you learn about Spain it’s that they have a relaxed attitude to life. This is a wonderful trait and one that we really should embrace in the UK but on this occasion the word relaxed, when applied to the arrival of the sound equipment, stretched even the loosest definition of ‘mañana culture’. With the gig kicking off at eight and the audience due to arrive from seven-thirty, the sound man appeard at just before seven, a rather nerve inducing two hours late. As a result the sound check was conducted while some of the audience were coming into the venue.

With the large numbers anticipated (we had close on a hundred and twenty people) – effectively a sell-out – we needed some help at the door to manage the throbbing throngs. In addition, we also needed a little help throughout the evening with things like the roving mike and to help with the new format. With the Tres Amigos on stage it fell to a friend of mine, Ian Hall, who manfully stepped into the breach and became ‘the fourth bloke’ for the evening. And at this point I need to give a big thanks to him for his help. 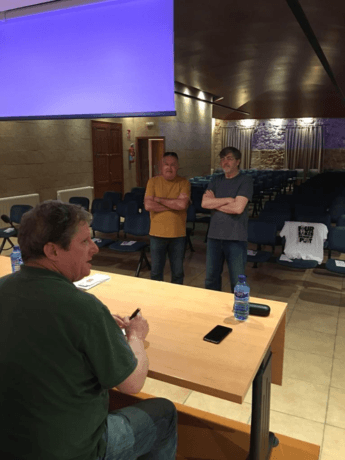 Ian and Douglas invigilating as Mark sits the compulsory pre-show exam (he failed).

Just prior to the gig the Councillor for Culture in Javea, Quico Moragues, popped into say hello. And I’d like to say a big GRACIAS to both Quico and Pepa Roig for both the council’s support and help in putting on the show. And while I’m at it I need to thank Bloody Scotland for all their support in getting us all to Spain. 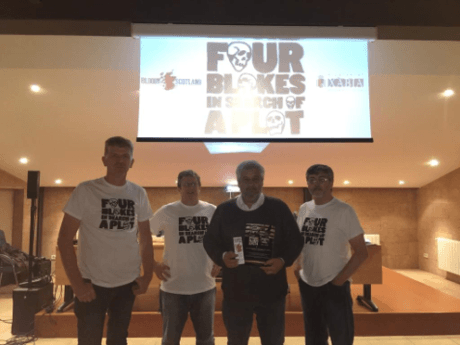 ‘Quico Moragues and the Tres Amigos.’ 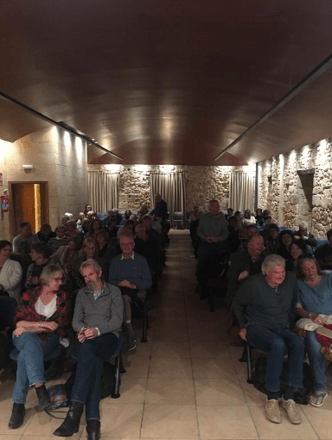 And so to work. The first order of business was to ask the audience to select the main protagonist and the murder weapon that would feature in our story. Ian dutifully collected the slips from the audience and placed them in the Tea Cosy of Inspiration. 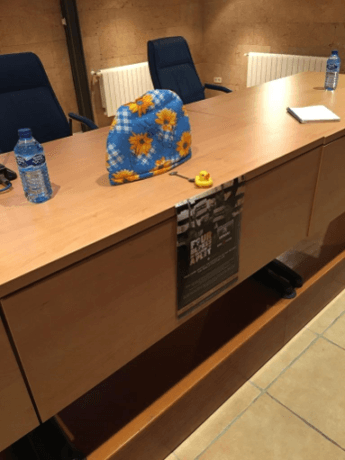 The Tea Cosy of Inspiration with Ducky and spoon (don’t ask).

The protagonist was drawn and was one Dick Pinto and the weapon of choice a boomerang. And that was what we had to work with. Douglas was selected by the audience to start writing and myself and Mark got down to talking as Douglas donned the Tea Cosy of Inspiration. The night fair flew by. Much laugher was had accompanied by more than a few groans. Douglas, Mark and myself desperately wrestled a story, word by word, into shape as we tried to create something cohesive (which to be fair would be a first). During the second half of the show we introduced the ‘Make it Awkward’ section and this went down well although it did make it slightly more difficult for us – but, hey, where’s the no pain. 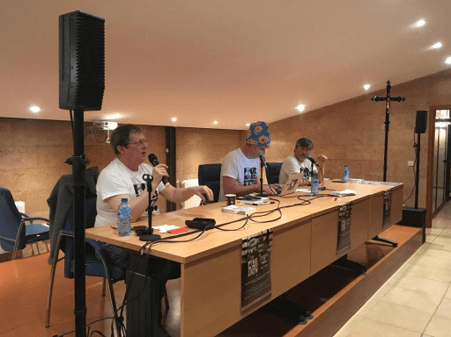 A photo that shows me, mid-type as Mark holds court with Douglas trying to get a word in edgeways.

Douglas rounded off the night by drawing the short straw and had to find a way to finish the story. He exceled by producing a fantastic conclusion that manged to include, at an audience members’ suggestion, Theresa May.

As we finished the gig the audience rose to its feet as one, mainly to make for the exit.

This was probably one of the best nights we’ve had as the Four Blokes and it’s a pity Neil couldn’t make it to share in it.

After chatting, signing books and generally winding down we retired to the, wait for it, bar for a well-earned non-alcoholic beverage (there is a lie buried in that last sentence).

The day after the night before dawned to find the Tres Amigos full of life, vigour and bursting with energy. Or as it is more commonly known in Scottish parlance – we were knackered. 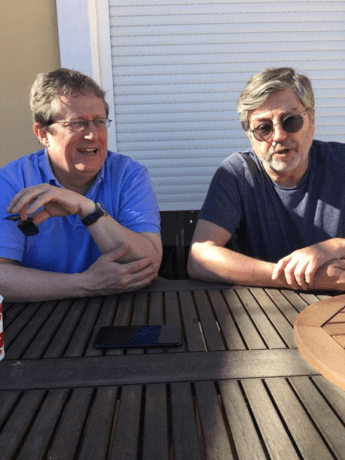 A slightly jaded but in good humour Mark and Douglas. 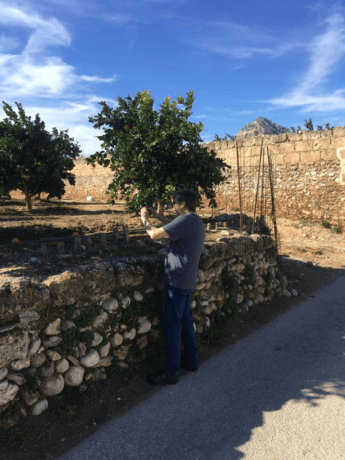 Douglas photographing orange trees –
for reasons known only himself he spent most of Sunday in this pursuit.

We closed of Sunday night with a pizza the size of the moon and a couple of gallons of tea before retiring for an early night. Something we do a lot. 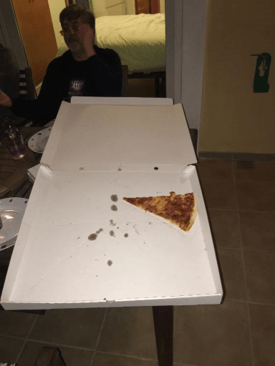 The pizza beat us.

And that ended the Four Blokes/Tres Amigos/Three Blokes and Ian my friend’s* (*delete as required) weekend in Javea.

My conclusion – a great weekend and great show. Judging from the social media reaction on the Sunday the audience had a wonderful time and according to Quico Moragues the council will be in touch about the future – so we must have done something right.

The continual drive to spread the word about Scottish crime writing continues and the Four Blokes will soon be taking the message to a much wider audience closer to home when we appear at the Glasgow International Comedy Festival on Wednesday the 18th of March at the Glad Café in Shawlands – tickets a very reasonable £6 each – what are you waiting for?

One With The Glass

When Glencairn Crystal Studio asked if it was possible, as part of their sponsorship of both the Bloody Scotland Debut Crime Book of the Year and the McIlvanney Prize for…