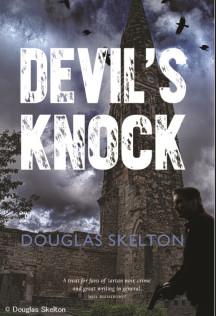 Want to know the question I’m asked most about my books?

It’s not ‘where do you get your ideas’ (which, for the record, I’ve never been asked), nor even ‘who would you like to star in the movie version’ (ha – I wish!).

No, the question I’m asked most is, ‘who are you going to kill off next?’

I’m three books into the Davie McCall series and it seems I can be somewhat cavalier with leading characters.

I used to call it my ‘Spooks’ approach to crime writing but life – and popular culture – moves on so now it’s the ‘Game of Thrones’ approach. As the joke says, George R.R. Martin doesn’t use Twitter because he only had 140 characters and he killed them all off.

I’m writing about crime in Glasgow and you can’t do that without breaking a few heads. Book three, ‘Devil’s Knock’, sees a bloody gang war erupting so there is some natural wastage.

My central character, Davie McCall, is surrounded by violent, dangerous people but that’s okay – he can handle himself. However, he isn’t untouched by the acts of others, or his own. Many of the other characters in the books see him only as a hard man, a bad man, but hopefully the reader sees more.

He’s had his troubles and they continue in the third outing. He also finds himself a new canine friend, which is good, because emotionally he’s a wreck. Following the events of ‘Crow Bait’ he’s even more distant than before, which doesn’t help his love life.

But when a senseless murder sparks a war he’s caught in the middle.

Meanwhile a Hollywood actor wants to ‘soak up his reality.’

And an old friend needs help.

Want to know what the follow-up question to ‘who you going to kill off next’ generally is? It’s this, ‘Will Davie McCall make it to the next book?’

Want to know my answer?

‘Devil’s Knock’, published by Luath Press, will be launched in Waterstones Argyle Street, Glasgow on Thursday June 18 at 7pm. Entry is free but please contact the store on 0141 248 4814. The first two books in the series, ‘Blood City’ and ‘Crow Bait’ are also available.