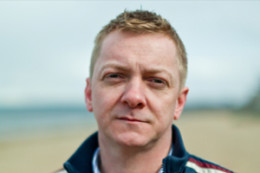 McIlvanney Prize longlister Doug Johnstone told us his top 5 albums that he listens to while writing.

I mostly listen to instrumental music when writing, as I find it hard to concentrate if there are vocals and lyrics. I like to listen to stuff that’s maybe a wee bit unsettling or offbeat too, just to set the vibe for the nasty things in the books.

Boards of Canada, ‘The Campfire Headphase’

Two Scottish brothers who make electronica that sounds like a false memory from the 1970s. Retro but also futuristic, somehow comforting but also unnerving. I love all their music, but this is their best album.

Again, I love all of Mogwai’s music, but I find myself returning to this record over and over again. It’s their soundtrack to the melancholic French drama of the same name, beautifully understated, but still disturbing.

Hopkins is a brilliant producer and soundtrack composer, and this is a mix album of other people’s music that he’s weaved together. It’s a beautiful example of how to evoke mood through sounds, so skillfully put together, it’s a real journey from start to finish.

LCD Soundsystem are an amazing punk-dance outfit from NYC. Their regular music is full of poignant lyrics and vocals by frontman James Murphy, but this continuous mix is one of the finest and funkiest soundtracks to life imaginable.

The Avalanches, ‘Since I Left You’

This album was allegedly made up entirely of samples from other records, and I could believe it. A leftfield Australian collective, they disappeared after this amazing album, which is a patchwork of wobbly beats and scratchy mash-ups.

Doug Johnstone will be appearing at Bloody Scotland in Writing Orkney on Sunday 11th Sept, 1:30pm and at our Scotland vs England football match.