Ceud mìle fàilte, as we say around these parts. A hundred thousand welcomes to Bloody Scotland!

Scottish crime fiction is amongst the best in the world. It’s the most popular genre amongst Scottish readers, both in bookshops and in libraries. It generates countless screen adaptations. And yet at present none of our 40-plus literature festivals celebrates it.

Well, that’s all about to change.

Bloody Scotland is an innovative festival which will showcase Scottish crime writing and place it in an international context. The other day, festival founders Alex Gray and Lin Anderson reflected on how it all came to pass…

Crikey! is it really almost three years since we drank that magical bottle of Prosecco? Or was it two (bottles I mean, not years!)? I can recall our conversation as if it was last week when we discussed the thought of a having a crime writing festival in Scotland. Appropriate that we were at a Crime Writers Association conference chatting about this. How laid back we were then! Do you remember it all?

Yes. It suddenly struck us how big a contingent Scottish crime writers were at the various English and American crime writing festivals yet we didn’t have a festival to celebrate our other cultural export here in Scotland.

And I remember the gleam of light in your eyes when you sat up straight, glass in hand, declaring, “It could be the Harrogate of the North”. Because Harrogate is a bloody good festival

And that might have prompted me to think up the name Bloody Scotland? Mind you, I did have a vision of these famous authors propping up bars at various festival around the world asking one another, “Are you going to Bloody Scotland this year?”

And now they are! 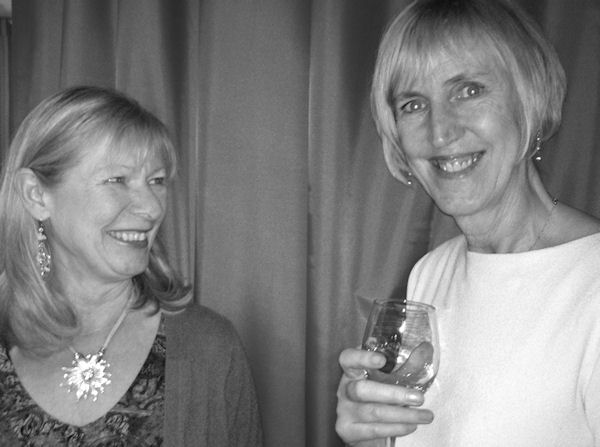 Alex Gray, Lin Anderson and - yes - a glass of Prosecco

Scottish crime writing continues to fire on all cylinders, and talented new voices keep appearing. Bloody Scotland is a long overdue celebration of Scotland’s favourite genre, one of its most successful cultural exports – and a chance to hear some of the most interesting international writers too.

Here’s a short video from the launch event last September (apologies for the audio quality).

And so… we’re up and running! Bloody Scotland is going to be special.

We do hope you’ll join us in September.